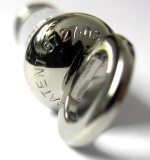 SKU:
£19.99
£19.99
Unavailable
per item
This is a reproduction WWI 'The Metropolitan' whistle made by J Hudson & Co Birmingham. The whistle is suitably marked up with the correct War Department Arrow and markings, including the Patent Number 5727.08 on the top, 'The Metropolitan' and Date on the body including 'J HUDSON & Co 244 BARR ST BIRMINGHAM'. On the bottom is 'MADE IN ENGLAND'.

This whistle was mainly used by the Army for signalling, in particular calling men 'over the top' of the trenches. It was also carried by men who transferred from the infantry to the Royal Flying Corps (RFC) and later the Royal Air Force (RAF).

This whistle is made by the same company that made the original whistles, in the same factory and using the same equipment. It is approx 80mm long x 17mm wide and made from Nickel (chrome) plated brass. This is the perfect whistle if you are a WW1 Army, RFC or RAF re-enactor, WW1 military enthusiast or collect WW1 related items.
Add to Cart
You can pay by Paypal or Debit/Credit Card (via Paypal), or contact us if you want to pay by other methods. Payments will be processed through our parent company Airborne-Cricket.com
People who bought this Whistle also bought these items:
Terms & Conditions  |  Privacy Policy  |  Cookie Policy  |  Links  |  Contact  |  Instructions |  Copyright © 2020  www.WarWhistles.com
Email: warwhistles@btopenworld.com  |  Telephone:  +44 (0) 7802 425911